One would think when travelling to the west coast of America that you would no doubt be greeted by the current storm of New England IPA’s that are being brewed all over the craft beer world. Although they were invented on the other side of the country, you would still assume it might get a look in on the west coast right? No, just no. “Catch them later” they yell from windows and roof tops all the way down from Seattle to San Diego….the home of IPA doesn’t want a bar of them.
So what do they brew? They came up with their very own haze style, not a milkshake, no New England, put simply it’s a – West Coast Hazy IPA or just ‘Hazy IPA’

Rather than bow down to their eastern neighbours and feature this ‘foreign’ style in their brewpubs & breweries, they decided to take what they’ve already mastered and just add a few glorious tweaks to the New England Style. While still smelling like someone poured a fruit bowl on your nose while lying down, these beers have the added addition of all the typical resinous and pine notes found in west coast IPA’s followed up by that big bitterness not commonly associated with NEIPA’s. For lack of more poetic descriptors, it’s like a really good American IPA ‘on the juice’ so to speak.

So with the influx of NEIPA’s on the market, we felt what better time to pay homage to the style and create our very own interpretation with the crew down at The Great Northern.

So what’s Northern Haze & why a cashmere IPA? As one of our brewers toured the west coast, he noticed this Cashmere hop pop up time and time again and found it strange we hadn’t seen it much at home, especially considering how tasty all the beers were that used it. Well that was enough for us here at 2 Brothers to say why not give it a go! As for Northern Haze, well it speaks for itself. This beer was brewed with the great team from The Great Northern and it retains a nice misty haze largely due to dry-hopping during fermentation.

As for the beer, at 85 IBU’s it’s definitely not a NEIPA! It’s a double-dry-hopped resin, pine, fruit delight with a light haze to match. With a monstrous amount of hops used during the boil, whirpool and dry-hop (Including a bunch of fresh hops straight out of The Great Northern Hop plantation), this is definitely one of the hoppiest beers we’ve ever produced, and we’re stoked with the result.

Like any hazy they’re best enjoyed fresh, & the only two places you can currently try it are at our Moorabbin BeerHall & The Great Northern Hotel (Carlton). It will be available around town in the coming weeks so keep your eyes peeled.

We hope you enjoy. 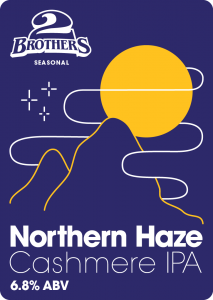